How can Zionism be Christian? 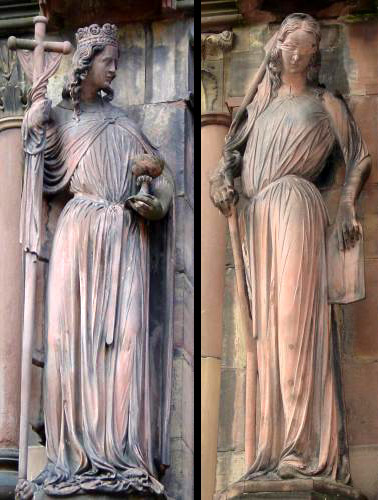 The Church and the Synagogue - Strasburg Cathedral, ~1230 CE

Here are some Bible passages that provide an answer for this question:

14 "Also I will restore the captivity of My people Israel,

And they will rebuild the ruined cities and live in them; They will also plant vineyards and drink their wine, And make gardens and eat their fruit.

15 "I will also plant them on their land,

And they will not again be rooted out from their land Which I have given them," Says the LORD your God.

31 "So you also, when you see these things happening, recognize that the kingdom of God is near.
32 "Truly I say to you, this generation will not pass away until all things take place.
33 "Heaven and earth will pass away, but My words will not pass away.

9 "And in that day I will set about to destroy all the nations that come against Jerusalem.
10 "I will pour out on the house of David and on the inhabitants of Jerusalem, the Spirit of grace and of supplication, so that they will look on Me whom they have pierced; and they will mourn for Him, as one mourns for an only son, and they will weep bitterly over Him like the bitter weeping over a firstborn.
If you still don't agree, please read this.
If you have comments, please add them below.

Christian Zionism as a modern theological and political movement embraces the most extreme ideological positions of Zionism. It has become deeply detrimental to a just peace between Palestine and Israel. It propagates a worldview in which the Christian message is reduced to an ideology of empire, colonialism and militarism. In its extreme form, it places an emphasis on apocalyptic events leading to the end of history rather than living Christs love and justice today. ( William H. from http://ahealthgroup.net )

The production of medicines in Canada is quite cheap at the same time meets the highest quality requirements. More Info http://canadianmedicines.net/cialis.html

Assuming ( contra Mooser) that an American Jew can aanodbn his/her/its Jewish identity* , so what? Any reason why he/she/it shouldn't?(* In one of my classes, after a discussion about loyalties, group membership, duties to ancestors, etc., a student expressed great relief. Hitherto she had be laboring under the belief that, because her ancesstors came from Greece, and she had been brought up to think of herself as a Greek, she had to be a sort of Greek. After the class she realised that she didn't, and could just be a happy American. She didn't have to care about Greece, or Greek culture, or pretend to like Greek folk music, or be nasty to Turks, or say gyro when she wanted a kebab, or any of that other stuff.I would imagine aanodbning Jewish identity would be similar.)

Geez, that's unbelievblae. Kudos and such.

So in fact Jesus of Nazareth himself is a Jews but HE oppose the cultural practice on Jews and HE insisted to bring back the real real way to Jews, it is a spirit way.

Both Christian and Islam were thought that Jews already soiled with human cultural influences.